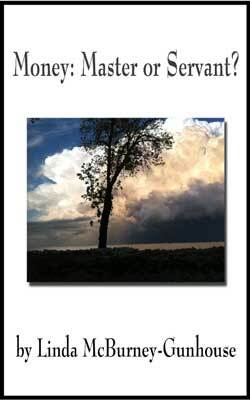 Is money our master, or have we become a slave to it, unwittingly allowing it to master us? Money and how we handle it profoundly affects our lives, and can become a pre-occupation unparalleled to almost everything else in life. There is a consequence that as we become more money-minded and pre-occupied with the pursuit of money and things, we discover that the more enslaved we become to it and a worldly money system that works in opposition to the things of God. This book attempts to address these and other important issues, and reveal alternative and effective ways to approach the financial side of life.

When I was still a teenager, I remember buying books about getting rich and being successful. One of the books I read was called, Think Big and Grow Rich by Napoleon Hill. While this book had some good advice common to many motivational books about making big money, it did not make me rich like it was promising. No book can do that, even though there are thousands of them out there with “secrets” to financial success. Reading books about getting rich were one thing, and then joining companies to sell their cleaning or cosmetic products to get rich, was another. I joined many different retail companies, worked from home, organized home parties, went cold-calling door-to-door, attended the motivational sales meetings, tried to stay enthusiastic and recruit new salespeople. What I ended up with were boxes and boxes of and shelves of cleaning and cosmetic products, very little money, and lots of disappointment. Each time I would come away disillusioned and poorer in my pocket in spite of all my hard efforts.
In addition to writing, I have also been a salesperson all of my life and have worked for various companies, so I know a little about how selling works. I know something about investments and real estate, as well. I know that the secret to success in pyramid selling is to convince other people to sell under you so that you can start benefitting from their profits. Everyone who is trying to sell you something, knows that in order to get you to buy, they have to appeal to the most common hopes and dreams of the majority of people. Usually the spiel goes something like this:

Wouldn’t you like to have more TIME for your loved ones and friends, take that much-needed vacation to the tropics, work your own hours and write your own paycheque? Maybe you’d like to pay off your mortgage or pay off those annoying credit card bills. Wouldn’t you like to retire early and enjoy more leisure time? With working for just a couple of hours a day, all your dreams can come true.

If you’ll notice some of the spam that comes to your email, or junk mail that shows up in your mailbox, they will essentially say the same thing. Their concept or product will promise all your dreams will come true. Usually you will have to invest something to get started, and this is how THEY make their money, to regularly get you to buy their product, which you are going to try to sell to people to keep THEIR company going. It’s actually very clever, but rarely brings you the success you think it will.
Companies trying to get you to sell for them are one thing, but there is a much bigger picture that affects us all. It’s the world of consumerism and marketing. I began to understand something about it right out of high school when I went to college and studied Journalism. One of my courses was about advertising, where I learned to write copy and design ads as part of the writing field. It was my first real eye-opener in the scheme of consumerism and how it is behind the world of consumerism as we know it today. I learned that major companies were so intent on gaining the largest share of the market in their particular field that they would literally stop at nothing to get your attention and your loyalty to their product(s). I heard about “subliminal” advertising as the most clandestine and bizarre form of brainwash I had ever imagined. The thought had never crossed my mind that advertising played such a large role in people’s decisions to purchase things. I had an insiders look into how it worked psychologically on the consumer, and then I had to try and write ads that would appeal to the masses. Knowing what I did about what was behind it all, I struggled to write ads, feeling that it bordered on dishonesty and deceit. I had a small and bitter taste of the power of the pursuit of money and what people will do to get the largest share of the market. It’s all a money game.
Later on, I went even further and took a comprehensive course in marketing. I learned all about department store set-up and display. I became aware of the term “impulse” goods and “impulse” buying, and realized I was guilty of being an impulse buyer on several occasions. For example, the next time you’re waiting in line to pay for your purchases, notice the little shelves, bins or trays on one or either side of you. In a grocery store it will likely be chocolate bars, gum, cough drops, magazines, right? In a hardware store, it will be tape, small screw drivers, garbage bags, work gloves, batteries, etc. You may think they have set this up for your convenience, but more likely, they are hoping you buy things that were not on your list so that THEY make some extra money. That’s impulse buying, when you buy things you see that may be on sale, or at the checkouts that were not on your list. It’s a great way to empty your pockets while shopping in their store.
From these two very insightful courses, I had a glimpse behind the scenes and learned that companies that are successful invest a lot of thought, research, money and strategic planning in order to encourage us to buy their products and/or services. You have only to look at all the ads on almost any Internet page to see how true this is. The problem with advertising and consumerism, I found, is that it often leads to wishful thinking and discontentment when we can’t possibly make enough money to see our dreams come true. We end up striving after wind.
So, we might wonder what is wrong with wishful thinking? We must be careful what we think about because it will affect our heart, the place where the Holy Spirit dwells if we are born again by His Spirit. A passage of Scripture that has had a profound impact on me when it comes to thinking too much about money and the things of this world is the following:

If ye then be risen with Christ, seek those things which are above, where Christ sitteth on the right hand of God. Set your affection on things above, not on things on the earth. For ye are dead, and your life is hid with Christ in God. Colossians 3:1-3

If money and the accumulation of wealth are what we are thinking about most of the time, then the Lord does not have rightful first place in our heart, does He? If we are focussed on money and material wealth, then how can we love Him and serve Him first and foremost and consider what He wants of us of utmost importance? We need to be reminded that when we belong to Jesus, we no longer belong to ourselves.

Do you not know that your body is a temple of the Holy Spirit, who is in you, whom you have received from God? You are not your own; you were bought at a price. Therefore honor God with your body. 1 Corinthians 6:19-20 NIV